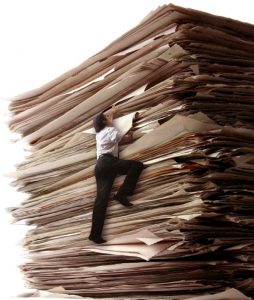 If you ask most foreign translators what they least like about working in another country, they will often name the bureaucracy involved.
When I first came to Spain I quickly learned to take a newspaper with me when visiting any government building to while away the hours. Nowadays I take my laptop and set up my office while in the queue. People mistake me for a civil servant myself and hand me their neatly filled-in forms (which I then chuck away to beat them in the queue). Actually, some surprisingly imaginative functionary has encouraged them to set up touch screens where you press the name of the counter you wish to visit and promptly receive a ticket to join the corresponding queue. The problem is, only the civil servants themselves know which queue you’re meant to be in. Thus, you end up collecting six or seven tickets to hedge your bets like a lottery whilst the amorphous mass of people known as the queue milling impatiently around you stares balefully on. I once went to enquire about getting an EU tax no., so I got tickets for the VAT counter, for the EU counter, for imports and exports, for self-employed people, and one called “certificates” for good measure. In the end, the last counter’s functionary told me I should have got one for “census” and stared at me as if I were incredibly stupid. Then he went for a coffee
.
Governmentspeak is a disease found in all countries, and I suspect more so in those that have suffered a dictatorship, but here it is truly a language in itself – even a spoken one. You can stand by while a civil servant talks to you in this language whilst addressing their colleagues normally, as if interpreting:
“This guy’s supposed to fill in his home address before signing and paying” becomes “You are required to complete the details of your habitual place of residence prior to executing your signature and furnishing the payment.”
To compound this, civil servants wanting to pass their exams must learn this language well to fit in, with the result that after years many of them – be they police officers or secondary school teachers – feel they have to use 10 words instead of 2 when speaking to the public in order to sound professional and cultivated (when in fact it makes them sound like they have a peculiar speech impediment).
Another example is a penchant for official-looking paperwork, stamps etc., which even seems to have lasted into the Internet age, with its resulting massacre of trees. You can see web pages intended to speed up bureaucracy that ask you to print out the receipt or form you’ve filled in and take it to the office to be stamped. The word “doh!” springs to mind. (Upon writing this, I have just returned from the tax office where I was required to go in person to confirm that I have paid the grand sum of zero euros to sub-contracted translators over the last quarter. Two hours of my working life lost.)
I remember many moons ago chatting away in Spanish for 15 minutes in a job interview before my interlocutor began looking at my CV and exclaimed: “You don’t speak Spanish!” (I had no official certificate to my name at the time, and this experience was my first lesson in bureaucracy here – that papers are seen to be more convincing than people). I told this tale to my hippy British flatmate, who with the aid of Tippex and a photocopier then rapidly produced several university degrees for himself and soon found a job. This was my second lesson – that they don’t bother checking the papers anyway. Incidentally, getting your qualifications officially recognised in Spain can be a notoriously lengthy (and fairly costly) task, and even then it often isn’t considered to be as good as the Spanish equivalent. (In fact, I myself gave up long ago in frustration.) Hopefully the Bologna Process will change all this, but it may explain the lack of foreign-born citizens in Spain’s civil service (or anyone of foreign descent in positions of public power), an obvious flaw in a country whose economy thrives on tourism and whose inability to speak languages is well known. (Check out some public tourist information and signs; some of them are a scream and have clearly not been written by translators or native speakers.)

But the fact is this is more than just a laughing matter. I calculate I spend at least 2 weeks a year embroiled in bureaucratic work when I could be working for the economy. Multiply this by several millions of working citizens and you get a mind-boggling amount of man-hours lost to the economy. Not to mention the fact that a job in the Spanish civil service is practically a job for life, no matter how badly you do it (I have had my bank account embargoed 3 times for the same mistakes made by functionaries, amid numerous other horror stories). A friend once broke open the champagne on hearing she had passed her oposiciones (civil service entrance exams), saying “I’ll never have to work again!” Another I bumped into in the market nonchalantly doing her shopping during working hours. I know of only one civil servant who decided to leave his job and go back to the private sector – he got bored and pestered his boss to give him something to do other than meeting me for 2-hour coffee breaks, but his boss had nothing more to offer him. I think you get the picture.This situation has given rise to the figure of the gestor – someone you pay to do the paperwork which in other countries presumably gets done by the civil service. Not that you’ll fare much better; I have got through 3 in as many years. The first handed in my papers late (so I lost my right to dole), the second charged me the earth for doing chores a monkey like myself could do, and the last one continued to charge my bank monthly after I had stopped employing him. Such sloppiness (or dishonesty) leads some to simply ignore the law and work around it, and it is depressing to see that they often do better as a result (if only in terms of their sanity), at least in the short term. I have attended translators’ seminars where gestores have been invited to answer questions, only to find that they simply don’t know the answer as they are not accustomed to dealing with cross-border issues that are the translator’s daily bread and butter. For example: “What exchange rate should I apply when paying VAT across European countries? The one at the time of billing the client or the one at the time of payment to the tax office?” Nobody seems to know, even those who work at the tax office whose job it is to know.

Nevertheless, I must point out that many Spanish people do indeed work hard and put in long, unpaid overtime. But it seems to me that one reason for this is that they are paying for a large part of the population that seems to be doing relatively little. Here in Valencia recently, civil servants in the justice department were caught on film “signing on” for work with a fingerprint scan, then promptly going home and returning at 5 pm to “sign out” again. To date, no action has been taken regarding this.There has also been a general strike against labour reforms and tinkering with pensions in response to the world economic recession, with the usual media attention on fringe pickets seeking public sympathy by burning tyres, blocking traffic and shouting at people. Months earlier there was already a strike against wage cuts by civil servants – natch – ironically perhaps the only Spanish social group where few fear for their job in these hard times, not to mention the usual summer threats from air-traffic controllers unsure whether to accept € 200,000 a year and an unprecedented strike by judges. In Valencia, the public transport workers usually strike around Fallas time to the delight of Valencians and tourists alike. They have recently taken to do doing so around the Formula 1 weekend to see if they can scupper the local economy that pays their wages in summer too.

Forecasts say that by 2050 only half of Spain’s population will be of working age, a common phenomenon in industrialized countries. Let’s hope they’re not all in the civil service. Many unemployed people seem to see this as the only way back to employment, which is not surprising when disproportionate social security payments for the newly self-employed deter any budding entrepreneurs such as freelance translators. Spain is also on its way to having the EU’s oldest population. Yet the strikes indicate that people in general seem to be unwilling to face the necessary and inevitable changes that demographics have thrust upon us with a public sector creaking under the weight of the population’s age. Many translators are considering private pension schemes, though the current economic climate does not bode well for either public or private institutions.As a self-employed translator creating wealth for the state (which I have nothing against) but with no dole, pathetic health insurance, no union and the crummiest foreseeable public pension, I feel I have the right at least to feel annoyed when I see some – by no means all – civil servants providing a poor, ill-informed service when we are all paying for it. Surely our tax and social security obligations can be handled more efficiently, or even automatically?